This is a single blog caption

The earthquake that shook Palu and Donggala in Central Sulawesi also caused a phenomenon of liquefaction. There were recorded thousands of houses affected by liquefaction within an area of ​​hundreds of hectares.

Geologist  from the Applied Geology Study Group of ITB’s Faculty of Earth Sciences and Technology, Dr. Eng. Imam Achmad Sadisun,  explained that the phenomenon of liquefaction can simply be interpreted as a temporal change in solid material behavior. Liquefaction can only occur in saturated soil. The water is present between the pores of the unconsolidated sediments and forms what is often known as pore pressure. In this case, potentially liquefied soils are generally composed of material dominated by sand size. Liquefaction occurs when pore pressure rises instantly affected by the strong and sudden earthquake events overcoming the material frictional strength. This process resulted in the sediments to loosen up as if they were floating in the water.

He further explained, if the position of this land is on a slope, the soil can ‘move’ towards the bottom of the slope in a gravitational manner, as if it can ‘walk’ by itself. So that the objects above it, such as houses, electricity poles, trees, etc. are carried along. 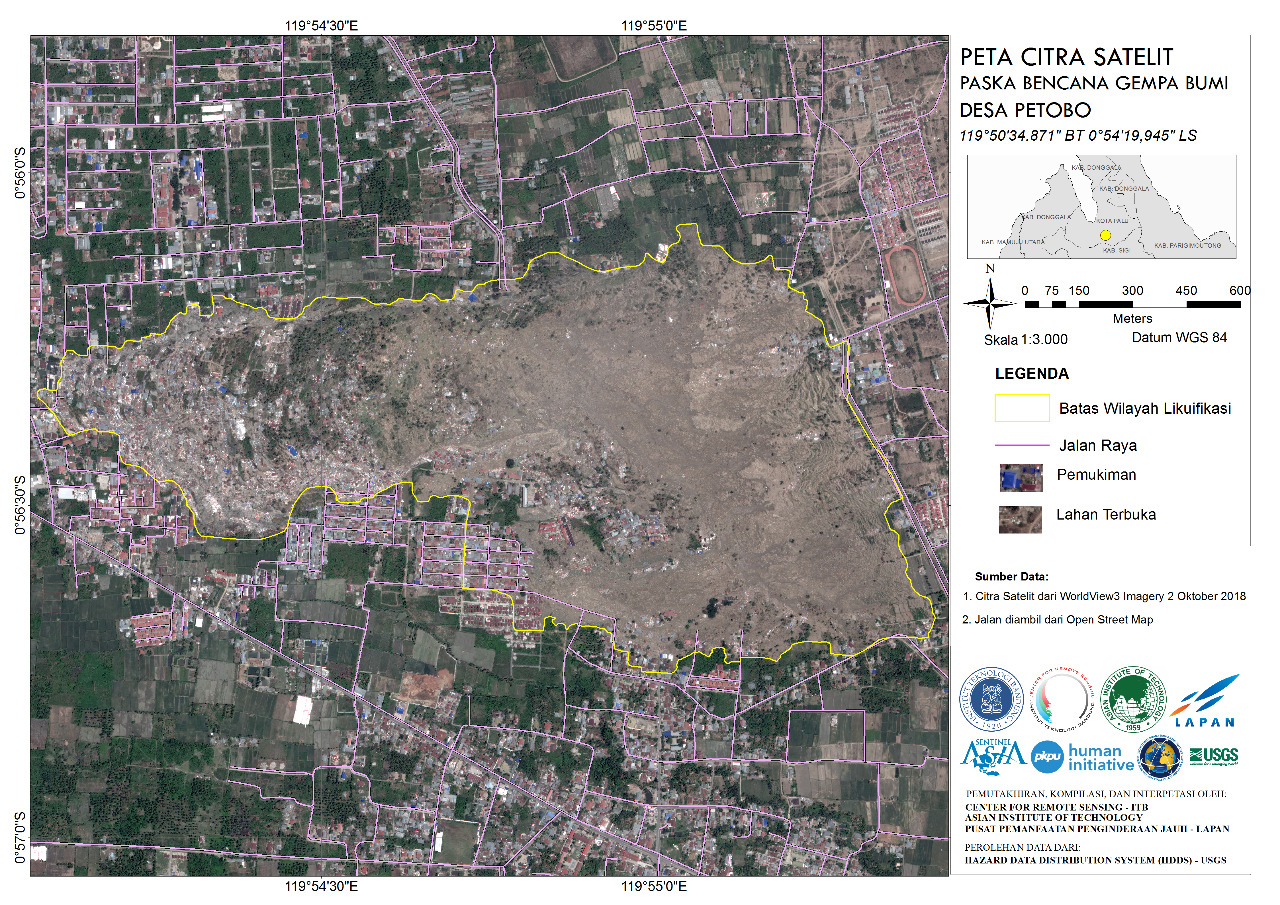 * Photographs of Palu area affected by liquefaction are processed by Lapan, Center for Remote Sensing ITB and AIT

“More specifically, this event is referred to as flow liquefaction.
The effect of liquefaction is also sometimes different if the soil’s frictional strength has not been exceeded, the pore water pressure that rises is strong enough, only causing cracks in the soil. And from the cracks there will be water carrying sand material, “he said.

Similar phenomena were observed in the Lombok earthquake, Dr. Imam suggested. Often there are water holes on the surface carrying sand, or a well suddenly filled with sand. It’s all actually due to liquefaction, which is known as a cyclic mobility product.

He explained, the potential for liquidation in a place can be identified, even calculated. Simply put, from the type of soil which is generally in the form of sand, up to a quantitative analytical approach, by calculating the liquefaction potential index. In general liquefaction occurs in areas prone to earthquakes, shallow groundwater levels and the soil is not well consolidated.

He said, liquefaction generally occurs in shallow earthquakes above 5 Richter Scale. The liquefied material is generally at a depth of about 20 meters, although sometimes it can be more, depending on the spread of the soil. Liquefaction only occurs below the local groundwater level not above it. “Technically, the potential for liquefaction can be reduced, namely by making the soil material become denser or hard by (1) mixing with cement (soil mixing), (2) cement injection (grouting),  (3) making deep foundations to hard soil/rock, and many others. However, strategic solution must be considered as the cost can be expensive for an ordinary house building, but for the high building it is mandatory” he concluded.

Original article were published in https://www.itb.ac.id/news/read/56834/home/mengapa-terjadi-likuifaksi-di-palu-menurut-ahli-geologi-itb